I was recently part of a short conversation on Twitter about how great it would be if Reaper had the AudioSuite functionality of Pro Tools.  The feature we were specifically after was the ability to have multiple plugins open at the same time, and to render them to any media item you’d like, in any order that you would like.  After going back and forth about applying FX to media items, or copying over FX chains, we came to the conclusion that there was no native way to accomplish this.  This was largely because in Reaper, you cannot have a free-standing effect/plugin window–the plugin either has to be assigned to a track or a media item.

But then I started thinking….what if you COULD copy any effect that you would like from a track, and apply it to any media item you want?  That would be pretty cool!  I saw no reason why this couldn’t be done, so I started to dive into the scripting capabilities of Reaper.  For those interested, I used the Lua scripting language.

What I came up with was a script that would allow you to render any effect window that is open (of your choosing) to any media item of your choosing.  I made two different scripts- one for stereo renders, and one for mono renders.  I thought it was important to have the options, because in sound design, sometimes you need to make decisions like this.

Please note that there is no way to preview this plugins before you apply them.  More on that later (or just press Ctrl+F: preview).

Also later: how you can add the scripts to Reaper, so you can have these features! 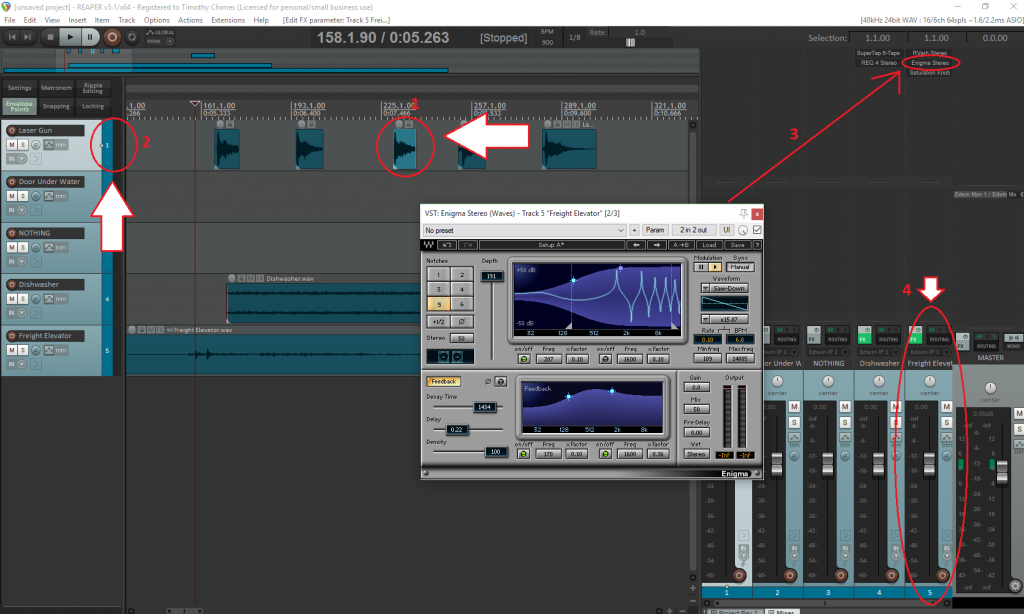 In the above picture, we can see 4 different things that are important:

1: We have a media item selected

2: The selected media source is on Track 1

3: We have an effect window open (specifically Enigma from Waves.  Note: in Reaper, it does not matter that this is a Stereo plugin)

4: Our chosen effect is on Track 5

All you have to do now is press the shortcut key you assigned to the MONO version of the script, and you’re done!  Here’s a before and after:

You should notice two things here.  One is the change in wave form.  If you listen back, you can hear that the modulation effect has been successfully applied!

The same process works for stereo media items.  Just use the shortcut for the STEREO version of the script!

Oh wait, but what if you have an effect that has a long tail, like a reverb or a delay?  Yes, that could be a problem, because Reaper doesn’t account for this tail when you render the media item with the new plugin.  Fear not, for we can select how far we want this tail to go! 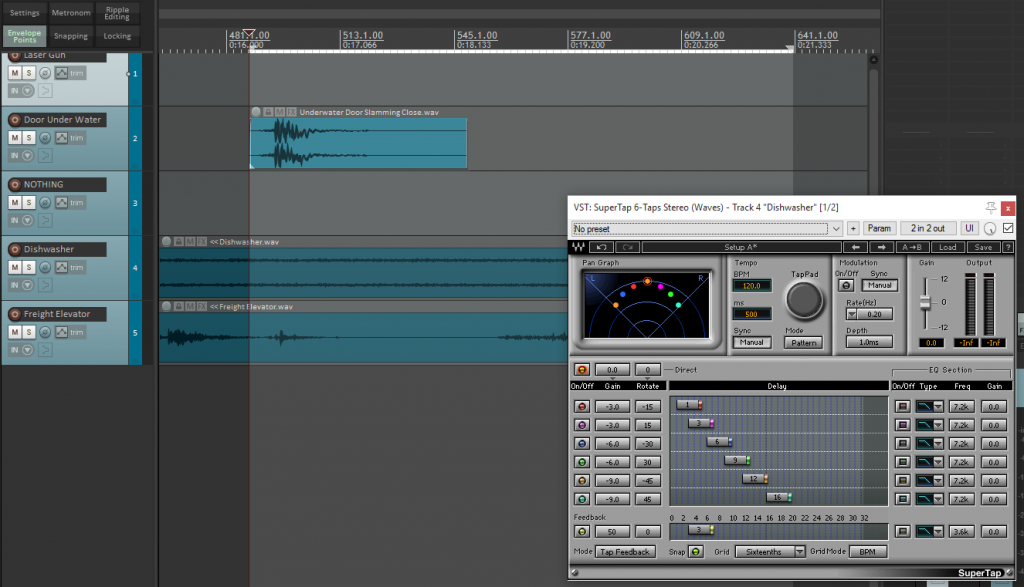 Note: I chose the Waves SuperTap for this example. Remember how the name of the FX is applied to the rendered media item?

Once you have the desired length of the selection, press the shortcut key for the script (I did the STEREO version in this example, but the choice is yours), and you should see the following:

The plugin has been rendered to the media item, including the tail from the feedback of the delay, and the name of the plugin (SuperTap 6-Taps) has been added to the end of the media item name.

There is no limit to how much these plugins can be stacked, or in what order.  But beware, this is a destructive process.  I believe that is the beauty of this script, as it makes you commit to a decision, but if you are used to non-destructive editing, beware.  Like any action in Reaper, you can undo this, but if you open a session later and decided that you want to undo the EQ that you applied to a media item 3 days ago, you will be out of luck.

You might be wondering how you’re supposed to be able to preview these FX before you render them.  Well, you can’t.  I haven’t been able to figure that one out.  There are a couple ways you can probably get around this using Reaper, but to be perfectly honest, just try rendering the plugin the media item, and if you don’t like it, undo it! The process is fairly quick, and since these are all shortcuts (well, as long as you use Ctrl + Z to undo), you can easily render the plugin, and undo it if you want to change the setting.  It takes about as much time as constantly pressing a “preview” button anyway.

Adding these scripts to Reaper is easy.  First, download them here:

For what it’s worth, I assigned my shortcut keys as follows:

Unless you are using these key combinations already, I would recommend this configuration, because:

To recap, here is what this script accomplishes:

Here is a checklist of things that you need to make sure of if you want the script to run:
That’s about it! If you find any bugs or weird things, email me (click on the Contact page).  I will also add a post on the Reaper forum, and this page will be updated with that link once that had been done.